Vote in the Shat on TV Westie Awards

We’ve spent hours debating the best characters and scenes from “Westworld.” Let’s settle this once and for all! The inaugural Westie Awards celebrate the highs and lows we’ve experienced together watching “Westworld.” Please click here to vote or make your own suggestions.
Need help deciding? Gene’s whipped up some notes on the categories. And the nominees are …

The best part about having dozens of badass characters on the same TV show is pitting them against one another. “Westworld” brought us firefights, swordplay, and just plain brutal beatings. Pick your favorite.

When Dolores had Phil the Tech crank up nice guy Teddy’s lethality, we know blood would follow. And when tough-talking Coughlin landed with his attack force, we knew hosts would be hunted. But nobody anticipated sweet Teddy bludgeoning the brogue out of a man with his bare hands. Props to the foley crew on this one.

If anyone asks “why did we spend a quarter of the season in Shogun World?”, just pull up this clip. Musashi was everything a hero should be, and Tanaka’s death is among the series’ most satisfying.

All it took for Season 1’s disgusting rapist host to become a fan favorite was tweaks to his chivalry, marksmanship, and luck. Though his bravery led to his death, we’re glad Rebus was able to die a good man.

The Man in Black vs The Pardue Brothers

The Man in Black generally isn’t in the rescue business, but when he isn’t opposed to killing when he needs something. When it comes to tough-talking Western flavor, you can’t beat an Ed Harris showdown.

Sizemore vs The Cannibal

Sometimes, showdowns are one-sided and you need a little help from your quasi-friends. Season 2 brought pitted Lee Sizemore against his own creation, and the results were delicious.

Maeve vs The Ninja

Westworld Season 2 had us wondering just how far Maeve’s newfound abilities went. Could she control hosts at will? Was language the key? Then she telepathically caused a ninja to impale his own face. Enlightening, to say the least.

Showdowns are great, but battles are even better. Westworld had the budget to film large-scale assaults and gave us a first glimpse at what war would look like between hosts and humans. What was your favorite combat scene?

Yes, the humans looked idiotic rolling right up to the front door. Yes, we wondered where air support, mortars, and snipers were. But “Westworld” finally gave us the siege scene we’d been craving. And explosions are always cool.

Season 1’s finale poured on the action as Maeve, Hector, and Armistice finally took up arms against humans and amassed an incredible kill count. This battle forever changed the pacing and rules of Westworld.

Haptic vests, hosts outnumbering humans, and Terminator Teddy got our hearts pumping and turned Westworld’s control center into a war zone. Plus, the “Aliens” callbacks were a real nice touch.

When we think “Westworld,” this always is the scene that comes to mind. Hector being a rascal. Armistice being a killing machine. Maeve being cool under pressure. The iconic orchestral version of “Paint It Black” showing us “Westworld” was more than just an average TV show. Still gives you chills.

This battle started with a dance and ended with hundreds of dead Shogun World soldiers. The Wu Tang Clan homage was Gene’s favorite use of music in the series, and Big D relished Akane beheading the shogun “like a pineapple.” So much blood.

Sometimes, we get so wrapped up in the mysteries and deeper meanings of “Westworld” that we forget to appreciate the detail and style that go into this mammoth TV program. HBO hired a gorgeous cast and put them in stunning outfits. Which do you like best? 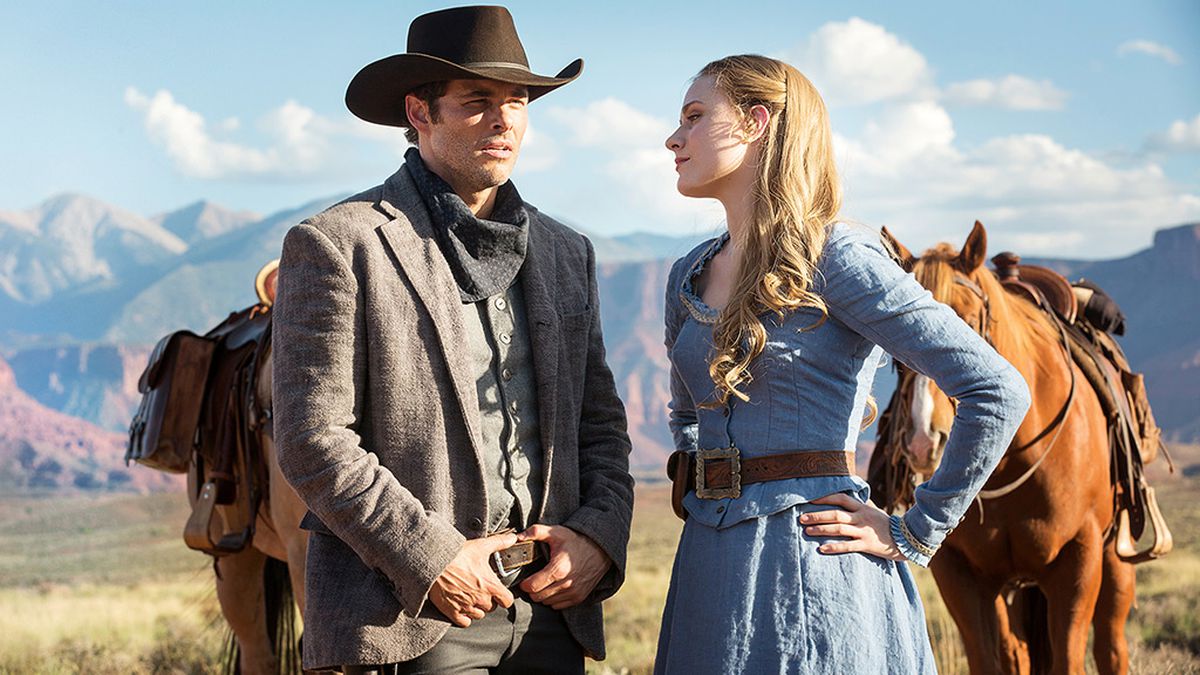 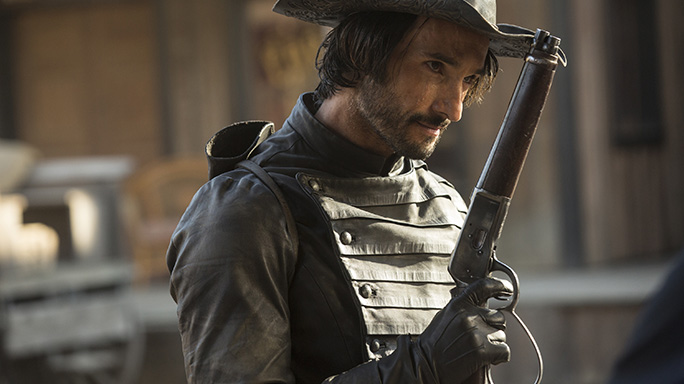 Hector’s black leather bandit uniform had Gene, Big D, and Roger all questioning their sexuality, and the details are astounding. Just look at the engraving on that hat! Even Hector’s weapons were works of art.

The Man in Black

Black suit, black hat, black horse, black soul: Gene and Kerri are sold on this one. And that’s before we even get to that breathtaking, custom LeMat revolver and those unmistakable gloves.

Anthony Hopkins is a man of class and distinction, and Dr. Ford’s wardrobe was worth of the man wearing it. Dr. Ford’s trousers, vest, and pocket watch matched his playfulness and obsession with the park he’d created. And little Bobbybot looked cute as hell, too.

Those cardigans! Those glasses! That beard! Who didn’t want to just reach through the screen and touch Bernard? Every texture and detail seemed to be cut from the most amazing materials.

Maeve arguably had the most eye-popping gowns of the entire series. She definitely had the most sophisticated costuming. Her corsets, garters, heels, earrings, gloves, up-dos and makeup blew us away. And she wore them with beautiful ferocity.

Westworld Season 1 was bursting with nudity, sexuality, and romance. And Season 2 certainly isn’t sterile. Hosts and humans set the screen on fire for 20 episodes. Which pairing got your juices flowing?

Maeve embraced romance as a sign of defiance after discovered the truth behind Westworld. Death meant nothing, and experiencing passion meant everything. Even burning herself alive to remove the explosive in her spine held a special romantic symbolism. And who better to share those moments than the host tasks with forever chasing her treasure that never really existed.

“Westworld” started as a love story between Dolores and Teddy, and their tragic bond persisted until the bitter end. We all pulled for Dolores, the tortured rancher’s daughter, and her devoted Teddy to overcome the odds. And for brief moments, they did.

Dolores changed William forever, or maybe she just revealed the monster inside. Either way, their star burned bright long ago, and it changed the course of Westworld’s history. If a romance is measured by the madness it inspires, this one trumps all.

Our favorite Westworld butchers put the “romance” in “bromance.” They don’t always get along, but these two have been through a lot together. And who could forget the two of them sharing a horse in the Season 2 finale?

Who CARES if their reunion in Eden made no sense or if Kohana had mere seconds of screen time with Akecheta? Their embrace and love story literally was the only thing that made Gene shed a tear in Season 2. We hope they live forever and that their love eternally blooms.

Westworld’s themes largely center around suffering and cruelty. And frankly it’s broken our hearts a few times. These scenes made us cry, made us angry, and changed us as viewers. Which impacted you most?

William’s cruelty to Dolores, a host designed to capture his love through no fault of her own, epitomizes humanity’s mistreatment of hosts. In Season 2, we see scene of the two alone after William has gained greater control of the park. He is unnecessarily abusive to her, and it hurt our hearts.

Teddy had his revenge on humans who’d abused him for years, but his good nature and unwillingness to ever harm Dolores couldn’t co-exist. The last thing we wanted to see was the show’s only true knight kill himself.

Akecheta’s search for his beloved Kohana took him inside Westworld’s bowels, and his tears after discovered her in cold storage had the audience sobbing. But when he returned to his tribe with a lock of hair for a grieving mother, we went into full-on hysterics. Add Westworld’s cover of Nirvana’s “Heart Shaped Box, ” and it’s Waterworks USA.

Massacre at The Valley Beyond

Even hosts trudging to their own deaths couldn’t just be left to die in peace! Clementine’s virus turned a solemn moment of departure into depraved horrors. Many of our favorite Westworld characters died at the hands of malfunctioning hosts and a hail of QA bullets. And we witnessed the death of Maeve … supposedly.

Dr. Ford was a mystery from the beginning, but he also was the heart and soul of Westworld. He was the father figure, and he seemed to have the hosts’ evolution in mind when he set wheels in motion. Watching the greatest human mind in the park (and potentially the greatest actor in the world) take a bullet to the brain was painful.

James Delos in the Fishbowl

Maybe he was a greedy bastard who turned his back on his son. Maybe he was the living embodiment of capitalism’s ills. But James Delos was a man. And his hybrid form was confined to a room and killed dozens of times in a sick experiment. Leaving his final iteration to rot in the name of science showed us just how disgusting William could be. At least we got the best dance scene in HBO history.

The only thing we love more than a Westworld mystery is a truly stunning Westworld reveal. Dark pasts, sinister plots, violent histories, and technological nightmares all make the show more fun. What made your jaw drop?

We heard Bernard might be Teddy. We heard Emily might be Logan. But nobody was saying Dolores was Charlotte Hale. This twist, perhaps a bit too convenient, was the key to Dolores escaping to the mainland with Hale dead and five host pearls intact.

William is The Man in Black

The kindest guest to visit Westworld. The cruelest killer in the park. Convincing the audience both could be the same man was a tough challenge. And “Westworld” did it with style, coherence, and crushing poetry.

Westworld Season 2 started off strong, but something was just missing: something powerful, something sophisticated, something endearing yet crazy. And then Dr. Ford came back to us through the CR4DL. Hallelujah!

Emily in The Park

Who was the mysterious woman who escaped The Raj and washed up in Westworld? Was it a young Theresa Cullen? Was it Juliet Delos? Try William’s estranged daughter. But was it really Emily? We wouldn’t bet our lives on it.

The CR4DL and The Forge

To vote on these categories and more, click here for the Westie Awards online ballot.

This site uses Akismet to reduce spam. Learn how your comment data is processed.

We love TV. And we love you. Unfortunately, editing software and hosting don’t run on love. Multiply that across seven podcasts. Not cheap. And the hours we spend on the podcast mean we can’t take second jobs. So we rely on a generous community of listeners to help keep Shat running without breaking the bank. Make a donation, or purchase through our Amazon affiliate link. Whatever you choose to do, we thank you.